Deluge of Funds to Return to Water Users 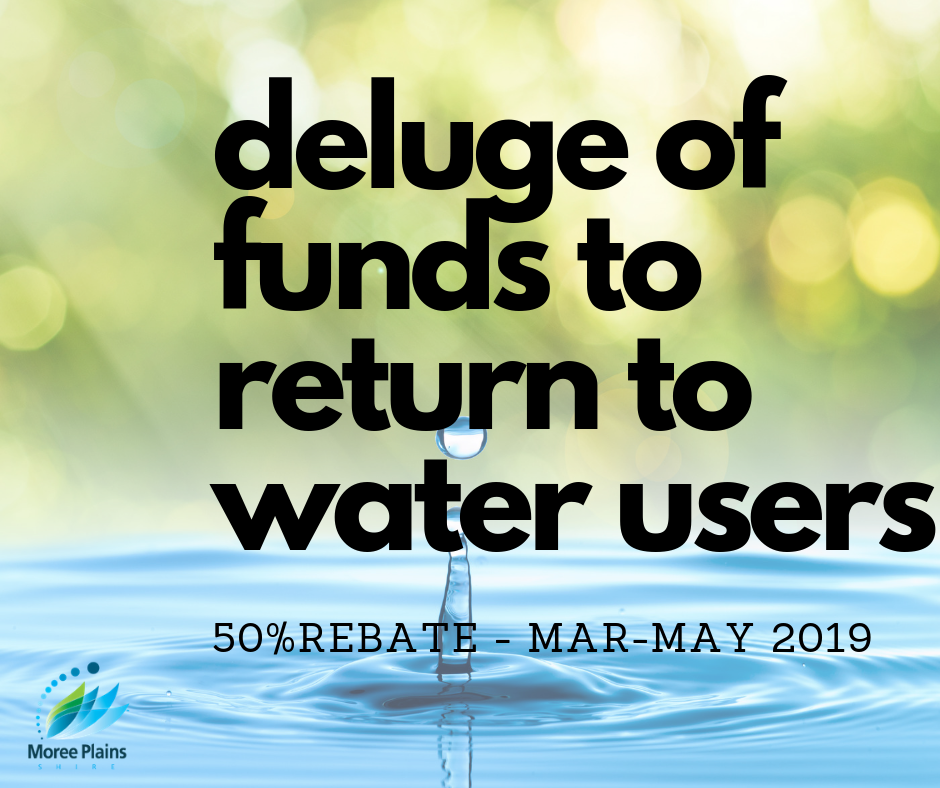 In a completely unprecedented move, Moree Plains Shire Council has committed to providing a massive 50% rebate on residential water users’ upcoming bills, set to arrive in letterboxes over the coming weeks.

The decision – which boasted unanimous support from all Councillors - was made at Council’s Ordinary Council Meeting on Thursday, 23 May 2019, and was mooted as a way for Council to give back to the community in a time where many in the Shire are doing it tough due to continuing drought conditions and a slower economy.

The 50% rebate will return approximately $500,000 to the Moree Plains community, and translates to an average of $150 cash back per assessment, which will be automatically applied to each bill.

Mayor Cr. Katrina Humphries explained that the decision was made following record water usage in the summer quarter, which resulted in an unbudgeted spike in water revenue.

“Many residents have had to use extra water to keep their gardens and lawns alive during this awful drought.

“With funds surplus to operational needs, and a lot of households doing it tough, Council decided to provide a one-off 50% rebate on the bill for March-May, putting the money back into the pockets of those that had spent it, and hopefully providing a boost to our local economy.

Council had previously sought to undertake a local economic stimulus package through the $1m Federally-funded Drought Communities Programme but had been advised that their project was ineligible.

“We are restricted with water fund revenue, as it can only be spent on water infrastructure and operations” explained Cr Humphries.

“We cannot spend it on roads or a new playground, for instance.

“With a large number of water infrastructure projects utilising Council and State Government funds already budgeted for, it was unanimous that the additional revenue be used to fund the 50% rebate.

“It is rare for local government to be able to have the chance to reward its residents, and Council is delighted that we are able to provide this one-off boost.”

The 50% rebate will be automatically applied as a deduction on all residential water accounts with consumption for the March-May period. As such, water users should pay the full amount on their accounts as per usual. The rebate will not be applied to State and Federal Government owned properties.