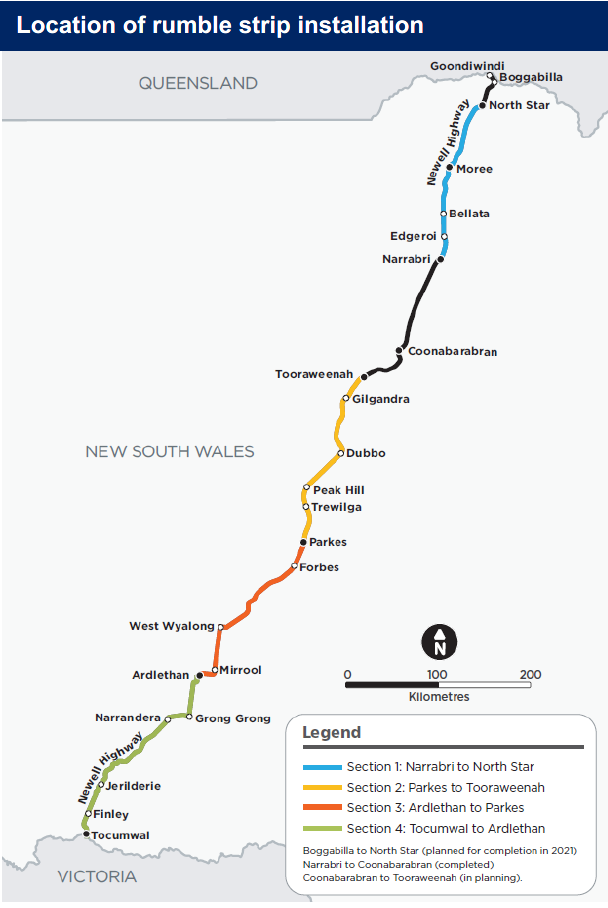 The Newell Highway is getting ready to rumble as Transport for NSW began road works last Tuesday to install rumble strip line marking between Narrabri to North Star.

The project in total covers approximately 3150 linear kilometres of the Newell Highway and is a part of the Australian and New South Wales Government accelerated $398M investment in road safety improvements through the Safer Roads Program and is included in the Australian Government $140M stimulus contribution towards this accelerated program.

The rumble strip line marking produces noise and vibration when a vehicle is veering into oncoming traffic or drifting towards the edge of the road warning the driver that their vehicle is leaving the lane.

Rumble strip line marking is a low-cost option which helps to reduce the risk of crashes due to inattention and fatigue and is particularly effective at night or during bad weather, it is estimated to reduce the likelihood of vehicles departing their lane by 15% to 20%.

The rumble strip line marking will be installed on both the centre and edge lines in four targeted sections along the Newell Highway, with section one being Narrabri to North Star.

Working hours will be from 7am to 6pm Monday to Saturday, during this time temporary traffic changes will be enforced to ensure the work zone is safe, this will include single lane closures and 40 km/h speed limits.

Motorists should add up to five minutes extra travel time to their journey while works are underway.